The Art of Dawah 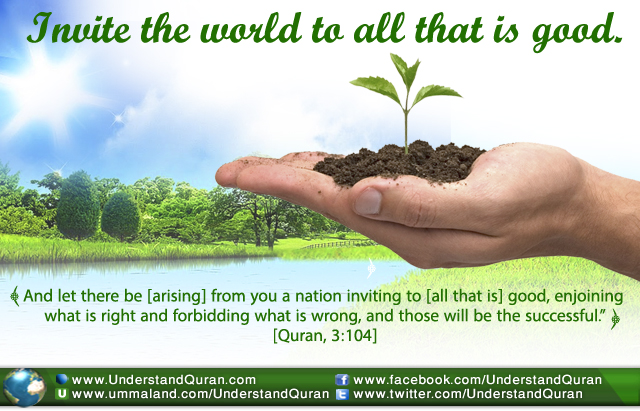 In the name of Allah, The Abundantly Merciful, the Always All Merciful, all perfect praise be to Allah alone; peace and blessings of Allah be upon His messenger, his family, his companions and those who follow his guidance.

Lessons from Surah An-Najm— The Stars

Allah (swt) says in the Quran, And let there be [arising] from you a nation inviting to [all that is] good, enjoining what is right and forbidding what is wrong, and those will be the successful. [Quran, 3:104]

Ordering good and preventing evil is a huge responsibility in Islam. We are commanded to exchange advice, guide others to goodness, and enjoin one another to truth and patience. Our welfare and salvation lies in this, and neglecting it causes immense danger and corruption. There are great lessons to extract from the teachings of Islam on how to accomplish this noble act.

Surah An-Najm is a chapter revealed in Makkah. It is reported that this is the very first Surah Prophet (saw) recited in public, but we know that this is not the first to be revealed.

This man had lived in a certain community for over forty years, earning the praise and trust of everyone, when he was given the arduous task of campaigning a “new” deen, a whole new way of thinking, a shake-up of their beliefs. Allah (swt) made it very clear how the prophet (saw) should first approach the people.

Graphic Description of the Process of Revelation

The whole of this chapter is an introduction to the basic faith of Islam, like any other chapter revealed in Makkah. Yet the very beginning of Surah An-Najm (verses 1-10) is a graphic description of the process of revelation. Allah (swt) gradually sets the stage to present the contents of a magnificent scripture to come.

Drawing on the community’s own belief, Allah (swt) takes an oath: By the star when it descends . . . [Quran, 53:1] Indeed the nation held stars in their highest esteem.

Allah (swt) introduces Himself: And that it is He who is the Lord of Sirius [Quran, 53:49]— the brightest star in the night sky, the star the community used to revere.

The Maker of the Star

People are questioned here: How can one worship a star that sets and disappears by morning? Subsequently Allah (swt) declares that He is the maker and owner of the very star they worship, planting in the community’s mind the seed of understanding of the one true God.

Then Allah (swt) says: Your companion [Muhammad] has not strayed, nor has he erred; Nor does he speak from [his own] inclination; It is not but a revelation revealed. [Quran, 53:2-4].

Confirming the Sincerity of the Messenger

Allah (swt) confirms the sincerity of the receiver of His revelation— the one whom the community already honored as “the trustworthy” and “the truthful,” continuing to illustrate the might of the conveyor of the message— the angel Jibreel.

Taught to him by one intense in strength— One of soundness, and he rose to [his] true form; While he was in the higher [part of the] horizon. [Quran, 53:5-7]

The Quran suggests that this is the first time prophet (saw) saw Angel Jibreel in his original state. [53:13-15] We also learn that this overwhelming sight did not stop Prophet (saw) from learning what he was supposed to learn; he was focused and had firm faith in his Lord.

Explaining the manner of revelation, Allah (swt) makes us understand that there could have been no error in the act of transmitting the message.

He stood poised at the uppermost horizon; then he drew near, coming closer; within the length of two bows or even closer; and revealed to Allah’s servant that what he was supposed to reveal. [Quran, 53:8-10]

We realize that there was absolutely no space for the prophet (saw) to be confused or for any mistake to occur in the learning process. Allah (swt) affirms at the onset that what we have today in our hands as revelation is nothing short of the plain truth.

This is one chapter that portrays such intricate details of the encounters between Angel Jibreel and the prophet (saw), in the act of conveying and receiving the message. Allah (swt) thus invites the immediate audience— the Makkan Qureish to think about the revelation that is to follow.

Accordingly, we are being taught here to be wise in transmitting what we know; to be meticulous. Our dawah should be food for thought for another, leading towards truth, rather than a deterrent from both the da’ee and the truth.