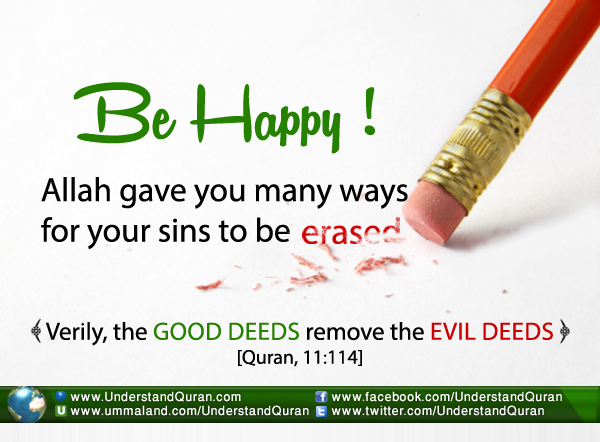 They are easy. They are unexpected. They are amazing.

We all sin, but we don’t all know of ways to make up for our sins. This is your chance, in shaa Allah. Here are five very simple, amazingly effective ways to expiate your mistakes, errors, and shortcomings from the Quran and sunnah.

In this week’s central ayah Allah ‘azza wa jall advises you: And perform the prayer, at the two ends of the day and in some hours of the night (i.e. the five compulsory daily prayers). Verily, the good deeds remove the evil deeds. That is a reminder for the mindful [Quran, 11:114]

In this ayah Allah ‘azza wa jall mentions the order for prayer and when you sometimes feel you have to push yourself to pray, motivate yourself with this immense reward. The Prophet salallahu ‘alayhi wa sallam said: When the time for a prescribed prayers approaches and a Muslim observes its ablution and acts of bowing and prostrating properly, this salat will be an expiation for his part sins, so long as he does not commit major sins, and this is for always [Muslim]

Allah ‘azza wa jall also mentions a crucial success formula: good deeds wipe out bad deeds.This refers to the minor sins we have committed. What a chance and what a mercy from Ar-Rahmaan!

Sometimes we think only those who did the most horrific deeds need to turn to Allah, but the Prophet said:  Beware of minor sins. For they add on until they destroy a person.  [Ahmad, At-Tabaranee]

So make it a habit from now on; each time you sin, follow it up with a good deed!

Five  super-easy good deeds that can remove your sins

Following the sunnah brings enormous virtues, and many simple practices carry rewards so huge you cannot even grasp them. One of them is the reward that comes with this simple dua. The Prophet salallahu ‘alayhi wa sallam said: He who has taken food and says at the end:
االْحَمْدُ لِلَّهِ الَّذِي أَطْعَمَنِي هَذَا وَرَزَقَنِيهِ مِنْ غَيْرِ حَوْلٍ مِنِّي وَلاَ قُوَّةٍ Alhamdu lillahi-lladhee at 'amani haadha, wa razaqneehi min ghairi hawli minnee wa laa quwwah - All praise is due to Allah Who has given me food to eat and provided it without any endeavour on my part or any power-  all his past sins will be forgiven. [At-Tirmidhee]

You might have heard of the same reward: Whoever observes fasts during the month of Ramadan out of sincere faith, and hoping to attain Allah's rewards, then all his past sins will be forgiven. [Al-Bukharee, Muslim]

Yet this similar reward is for a simple supplication; all you do is eat and acknowledge the perfect power of Allah to provide for you, without any doing of your own. The reward is the forgiveness of all your previous sins.

Abdallah ibn ‘Amr  said: The Messenger of Allah salallahu ‘alayhi wa salla said: There are two qualities, no Muslim man acquires them but he will enter Paradise, and they are simple and easy. He should glorify Allah (say subhanallah) ten times immediately after each prayer, and praise Him (say alhamdulillah) ten times and magnify Him (say Allahu akbar) ten times. I saw the Messenger of Allah counting this on his fingers. He said: That makes one hundred and fifty on the tongue, and one thousand five hundred (hasanaat) in the scales. When you go to bed, glorify Him and praise Him and magnify Him one hundred times: that will be one hundred on the tongue and a thousand in the scales. Who among you does two thousand and five hundred sayi’aat (bad deeds) in one day?’ They said: How could we not count (our sins)? He said: The shaytan comes to any one of you whilst he is praying and says, Remember this, remember that, until he finishes his prayer and does not do (this dhikr), or he comes to him when he is lying down and makes him sleepy, until he falls asleep (without doing this dhikr) [At-Tirmidhee]

Revive this sunnah and use the dhikr: ten times subhanAllah, alhamdulillah and Allahu akbar after salah (most of us know only of the 33x of each of them). Count them on your right hand to follow a way of Rasulullah.

Make sure you say before sleeping: 33 times subhanAllah, 33 times alhamdulillah and 34 times Allahu akbar and use notes wherever you pray and near your bed. As the Prophet alerted you; these dhikr are very simple, but we are not consistent as Shaytan makes us forget!

One tip is to give sadaqah as soon as you sinned, even if it is a small amount. Another practical tip is for these specific sins  you keep falling into; tell yourself you will give a certain amount in charity if you commit that sin again, set a higher amount if you do it the second time and even a higher amount if you do it the third time. This way you make your sins expensive, so you use your love for things in this world to fight your sins until you reach the desired state of stopping that sins out of pure love and shame of Allah ‘azza wa jall.

4.      The supplication at the end of every meeting
The Prophet said: Whoever sits in a gathering which indulges in useless talk and before getting up supplicate.

سُبْحَانَكَ اللَّهُمَّ وَبِحَمْدِكَ، أَشْهَدُ أَنْ لا إِلَهَ إِلا أَنْتَ، أَسْتَغْفِرُكَ وَأَتُوبُ إِلَيْكَ subhanaka Allahumma wa bihamdika, ash-hadu an la ilaaha illa anta, astaghfiruka wa atoobu ilaik -Glory be to you, o Allah, praise be to you. I testify that none has the right to be worshiped but you, I seek Your forgiveness and turn to You- he will be forgiven for (the sins he may have intentionally or unintentionally committed) in that assembly [At-Tirmidhee]

Even sitting down for a meal with one friend or your spouse is a gathering, so memorize this dua, use a note in your house or reminder on your phone and take the chance to be forgiven for the sins you committed in that meeting.

5.      100 times a day subhanAllahi wa bihamdihi
The Prophet said: And he who utters سُبْحَانَ اللهِ وَبِحَمْدِهِ  subhanAllahi wa bihamdihi - Glory be to Allah and his is the praise-  a hundred times during the day, his sins are wiped away, even if they are like the foam of the sea [Al-Bukhaaree, Muslim] Put up a note on the wall to remind yourself of this super-sin eraser!

Note: A bad deed that violates the rights of others can’t simply be wiped out by doing a good deed. In that case the right must be returned to the person and forgiveness must be asked; if this is not possible you should supplicate for them. Also, good deeds help expiate minor sins, but they won’t compensate for major sins for which sincere repentance must be made by showing true regret, being determined to never do it again and asking for Allah’s forgiveness.

O Allah ‘azza wa jall aid us to do abundant good deeds, wipe out our bad deeds, and replace our evil deeds with good deeds, ameen!