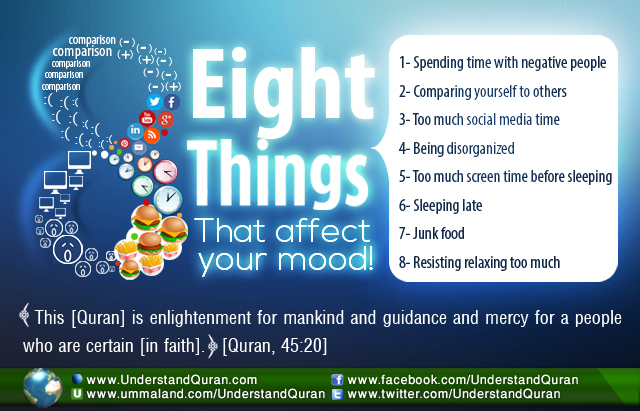 During the day moods often rise and fall; sometimes we cannot even pinpoint why. Research has shown that there are things that affect mood and productivity negatively. But guess what? A tip regarding every mood can be found in the Quran and the sunnah!
Allah ‘azza wa jall says in this week’s central ayah: This [Quran] is enlightenment for mankind and guidance and mercy for a people who are certain [in faith]. [Quran, 45:20]

Let’s discover eight things that affect your mood and some daily-life tips from the Quran and sunnah to enhance your mood, inshaa’Allah!

8 mood-flatteners and how to battle them

1. Comparing yourself to others

Wherever you are, you are bombarded by images of photo-shopped men and women, whether it is by the media or the brushed up selfies people upload on social media. And whether you realize it or not, your self-image and your mood can be affected by the images you see. You start thinking about all the things you don’t have and the things you don’t like about yourself, even though you know most of these images are not even real.
Tip: The Prophet salallahu ‘alayhi wa sallam said: When one of you looks at one who stands at a higher level than you in regard to wealth and physical structure he should also see one who stands at a lower level than you in regard to these things. [Muslim] The simplest solution is to avoid these pictures, but sometimes you can’t or won’t. Next time, confront yourself straight away by remembering those who have less than you. In this way you can balance yourself and your gratitude to Allah.

2. Too much social media time

3. Too much time with negative people

Chances are that if you spend a lot of time with an ill person, you get ill, too. The same goes for emotions, and negativity is often more contagious than positivity.
Tip: Try to avoid spending too much time sitting with people who constantly complain, and if you can’t avoid these people, try to bring some positivity to the encounter instead of going along or silently listening to all the negativity! Think of this beautiful ayah inspiring you to advise others to truth (and gratefulness) and patience: Except for those who have believed and done righteous deeds and advised each other to truth and advised each other to patience. [Quran, 103:3]

It’s simple; when your house is a mess or your desk is covered with papers, it affects your mood.  Conversely, a clean and organized environment makes you feel much better!
Tip: Be motivated by: Cleanliness is half the faith (emaan). [Muslim] This means outer and inner cleanliness. A simple tip to start off with is to designate certain places for all your frequently used items and make this a closed drawer or box. When your mind doesn’t “see” all these items (which mean unfinished business) you feel less overwhelmed and can slowly deal with the tidying up.

5. Too much screen time just before bedtime

According to research, being exposed to the bright screen lights of phones, tablets, etc. can suppress the production of melatonin in your body, a hormone that regulates your mood and can only be produced in darkness.
Tip: Impose this strict rule on yourself: at least 15 minutes before bedtime don’t look at any bright screens. Instead follow the sunnah and read the special “before sleeping” supplications. You can find them here.

6. Going to bed too late

Many of our “to-do’s” come at the expense of our sleep, but research shows that people who consistently got to sleep late at night are more likely to develop depression. Another issue is that we end up browsing our phone for ages for our newsfeeds and messages as a way to relax just before we sleep, eating into the valuable “dark” time that Allah ‘azza wa jall made for us to sleep.
Tip: Simply reflect on this ayah and let it motivate you to beat temptation at nighttime: It is Allah who made for you the night that you may rest therein and the day giving sight. Indeed, Allah is full of bounty to the people, but most of the people are not grateful. [Quran, 40:61]

In our desire as believers to spend our time wisely, we might forget that sometimes we need to relax to restore our willpower! Too much resisting of any (halaal) means of relaxation can actually negatively affect mood and productivity.
Tip: There are multiple ahadeeth about the importance of recreation, emphasizing its value in helping someone to regain vitality and increase in productivity. Handalah bin Aamir once complained to the Prophet that some of his time is intermingled with playing with his children and family. The Prophet answered: . . . But there should be a time for this and a time for serious deeds. [Al-Bukhaaree and Muslim]

Some foods, such as foods that contain high amounts of omega-6 and are deep-fried (like crisps and chips) negatively affect your brain.
Tip: Think about the command this ayah contains: O you People! Eat of what is on earth, halaal and pure (tayyib), and do not follow the footsteps of the Satan; Indeed for he is to you an open enemy. [Quran, 2:168] Let this motivate you to not only focus on eating that which is halaal, but also how tayyib the food you eat is. One study mentioned that decreasing omega-6 and increasing omega-3 can positively affect your mood! Examples of the world’s most rich omega-3 foods are walnuts, sardines, salmon, beef, soybeans, tofu, shrimp, Brussels sprouts, and cauliflower.