7 tips for an amazing wudoo! 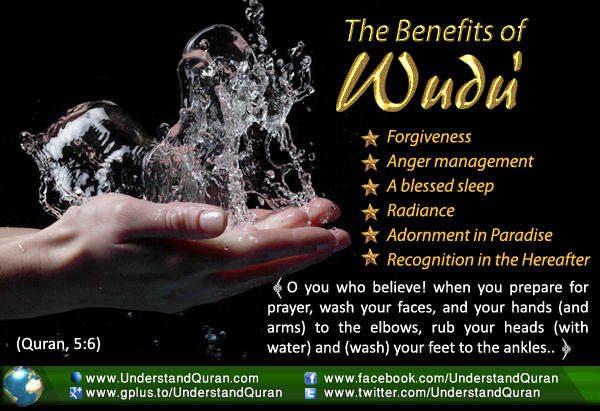 Is wudoo for you just a quick wash before prayer? Then it’s time to learn about the amazing benefits of this productivity booster in this life and the next. Let’s find out how you can perform your next wudoo with a deep love insha’Allah!

Allah ‘azza wajal says in this week’s central ayah, which has a tremendous influence on our life multiple times a day: O you who believe! when you prepare for prayer, wash your faces, and your hands (and arms) to the elbows, rub your heads (with water) and (wash) your feet to the ankles..(Quran, 5:6)

Here’s a selection of 7 benefits of making wudoo linked to being more productive:

For forgiveness.
Sins weigh you down. They make your heart feel heavy and press your spiritual productivity. Doing wudoo is an ultimate way for forgiveness so your spiritual productivity increases again! The Prophet salallahu’ alayhi wa sallam said: When a Muslim servant or a believer washes his face (in the course of wudoo) every sin he has committed with his eyes is washed away from his face along with the water, or with the last drop of water; when he washes his hands, every sin they wrought is erased from his hands with the water, or with the last drop of water; and when he washes his feet, every sin towards which his feet walked is washed away with water, or with the last drop of water, with the result that he comes out cleansed of all sins.[Muslim]
Action: pay attention to every single step of your wudoo and do not rush or neglect any body part by reminding yourself of this immense reward!

To have a blessed sleep.
Imagine an angel staying very close to you all night long and not only that, imagine that angel begging Allah ‘azza wajal to forgive you! This is what happens when you make wudoo before you go to sleep, what a blessing. You can even sleep in a productive way. The Prophet salallahu ‘alayhi wa sallam said: Purify these bodies and Allah will purify you. Whenever a slave sleeps in a state of purification, an angel sleeps within his hair and he does not turn over during the night except that he [the angel] says: ‘O Allah, forgive Your slave, for he went to sleep purified. [Tabarani]
Action: Next time when you feel tired or sleepy, push yourself by thinking about this hadith!

For anger management.
Anger is one of the true productivity-killers, how many decisions you made in a moment of anger were good for you? Saying things in anger is one of the reasons many friendships and even marriages get damaged, there was a reason the sahaaba would fear their own tongues. Doing wudoo is a very underestimated weapon from the sunnah. The Prophet salallah ‘alayhi wa sallam said: Anger comes from the devil, the devil was created of fire, and fire is extinguished only with water; so when one of you becomes angry, he should perform ablution. [Sunan Abu Dawood]
Action: We all know we should, but who of us really makes wudoo when we are angry. At least try it once next time and see the difference!

For radiance.
Do you know how your beloved Prophet salallahu ‘alayhi wa sallam will be able to recognize you as being one of his followers on the Day of Judgement? The Prophet said: On the Day of Resurrection, my followers will be called “Al-Ghurr-ul-Muhajjalun” from the trace of ablution and whoever can increase the area of his radiance should do so (by performing ablution regularly). [Al-Bukharee]
Action: do your wudoo properly and increase the times you do wudoo!

To elevate your ranks in Paradise.
The Prophet salallahu ‘alayhi wa sallam said: Shall I not tell you something by which Allah effaces the sins and elevates ranks?” The Companions said; “Certainly, O Messenger of Allah.” He said, “Performing the wudoo thoroughly in spite of difficult circumstances..[Muslim]
Action: So next time when it is very cold, remember this enormous reward for that little bit of hardship.

To have your past sins forgiven.
There is a beautiful sunnah many of us have forgotten. Let’s revive it and earn lots of hasanaat (rewards) insha’Allah! The Prophet salallahu ‘alayhi wa sallam said: If anyone performs ablution like that of mine and offers a two-rak’at prayer during which he does not think of anything else then his past sins will be forgiven.[ Al-Bukharee]
Action: pray two voluntary rakaat after your wudoo and inspire others to!

For Allah subhanahu wa ta’alaa alone.
Your intention of doing wudoo is very important (however, you don’t have to pronounce your intention out loud). Many people say my intention to do wudoo is for prayer, your intention is to do wudoo to please Allah ‘azza wajal.
Action: according to the sunnah, say bismillaah (In the Name of Allah) before wudoo.
Know that wudoo is an act of worship and we can not take away or change anything about the way an act of worship is done. The Prophet salallahu ‘alayhi wa sallam did not make any dua’s (supplications) during the wudoo.

To purify yourself with less!
Let’s be honest; how much water do you use (or actually waste) while doing wudoo? Anas radiyallahu ‘anhu said: The Prophet salallahu ‘alayhi wa sallam used to make wudoo with a mudd of water..[Muslim and others] A mudd is approx the amount of water which is held by the two hands cupped together!
Action: use a bowl to do wudoo from instead of a running tap!

For a productive wudoo memorize and reflect (!) upon these two sunnah supplications to say after wudoo:

Ash-hadu an laa illaa illaa-llaahu wahdahu laa shareeka lah wa ash-hadu anna muhammadan ‘abduhu wa rasooluh.
I bear witness that (there is) no god except Allah. He is alone; there is no partner to Him. And I bear witness that Muhammad (is) His slave and Messenger.

Reflection point: Recite this keeping in mind the dangerous consuqences of shirk. Allah made us and we are for Him. He owns us and everything else. We are all slaves of Allah and should live like a true slaves.

O Allah! Make me from among those who repent and make me from among those who purify themselves.
Reflection point: We humans commit mistakes again and aigain, We don’t do many things that we are supposed to do and if we do them, we don’t do them properly. Therefore we need to repent again and again. O Allah! Make us pure in our beliefs, thoughts, body, clothes and places!

Check here for a preview: https://understandquran.com/courses/short-course-1.html