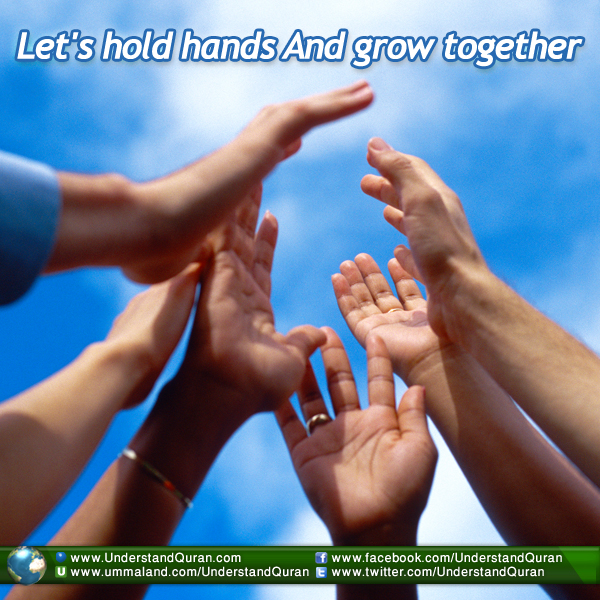 The believers are but brothers, so make settlement between your brothers. And fear Allah that you may receive mercy. O you who have believed, let not a people ridicule [another] people; perhaps they may be better than them; nor let women ridicule [other] women; perhaps they may be better than them. And do not insult one another and do not call each other by [offensive] nicknames . . .O mankind, indeed We have created you from male and female and made you peoples and tribes that you may know one another. Indeed, the most noble of you in the sight of Allah is the most righteous of you. Indeed, Allah is Knowing and Acquainted.The bedouins say, ‘We have believed.’ Say, ‘You have not [yet] believed; but say [instead], “We have submitted,” for faith has not yet entered your hearts. And if you obey Allah and His Messenger, He will not deprive you from your deeds of anything. Indeed, Allah is Forgiving and Merciful.’ The believers are only the ones who have believed in Allah and His Messenger and then doubt not but strive with their properties and their lives in the cause of Allah. It is those who are the truthful. [Quran, 49, 10-15]

Our ethnic differences have nothing to do with our status as members of the ummah. A German Muslimah owes as much love to er Muslim sister in Ghana as she does to her Muslim neighbor in Hamburg. Allah has not given us the right to distinguish the Muslims of certain countries as somehow having greater value than Muslims of other countries (or skin colours).

Allah intentionally created us with differences so that in discovering and living with these differences we would achieve understanding and learn how to live in harmony. He created a beautiful diversity in order to achieve a wondrous peace. How can we pass up such a great blessing?

As Surat Al-Ĥujurāt makes very clear, He favours the righteous of all tribes and peoples, looking on their comportment, listening to their words, and studying their hearts. Outward appearances don’t count.

We must be especially careful that those to whom the Message first arrived do not see themselves as racially superior. Without obedience to Allah, claims of belief mean nothing. There is no race on the planet that can claim that all its members live in Allah’s favour.

Last but not least, fear, revere, remember, and reflect on Allah. Always.

The believers are but brothers, so make settlement between your brothers. And fear Allah that you may receive mercy. [Quran, 49:10]

May your minds be opened and your hearts enriched,