Letter to My Christian Dad 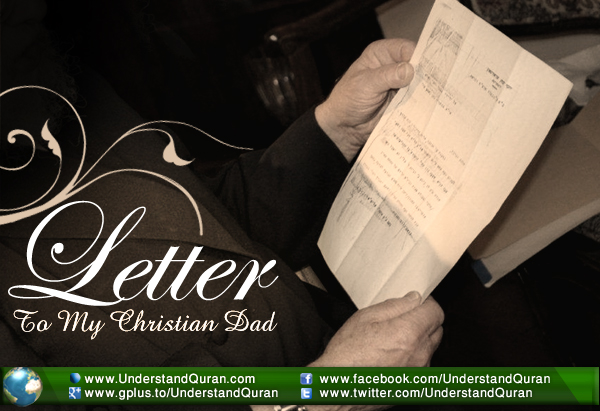 I really don’t know when I’ll be handing you this letter.  As long as I’ve held onto it and prayed over it I still get the sense: Wait—not yet.

I’m not afraid of your rejection, or of your anger. The only thing I fear is hurting you, making you feel like I’ve betrayed you and turned my back on all you’ve taught me, because this couldn’t be further from the truth.

So instead of telling you that I’ve reverted to the religion I was born with, I’ve been telling you about Islam. This comes as no surprise to you; you know I write a lot about Middle Eastern countries and am always eager to share my knowledge.

Alhamdulillah, you’ve been open to listening; bit by bit I’ve watched the clouds of delusion slowly passing from your eyes, all the harm done by propaganda slowly dissolving away as you see how closely Islam is connected to Christianity and how good and righteous real Muslims are. I’ve heard you talking to others about the beauty of true Islam and the good example that’s set by the pious ones. Islam is becoming beautiful to you, no doubt because you’ve always been a seeker of truth.

Learning to Speak the Truth in Love

“Speaking the truth in love.” This motto summed up the purpose of the village church where you preached for 36 years. The words shone from a small bronze plaque that we passed on the way into Sunday morning service. We didn’t always live up to it, but it was a beacon and a reminder. It told us to be truth seekers, truth tellers, and truth sharers.

This may not come as good news, but I would never have become a Muslim had it not been for your teaching me to seek truth. My inquiring mind often disturbed and even embarrassed you, but you never condemned me for exploring new intellectual territory. Your main concern was that I walk with God and live in obedience to Him. For this I’m profoundly grateful to you; it’s the one thing that lead me to real freedom.

The Bible and the Quran

Thanks to your influence, I read the Bible from cover to cover at least twenty times in my lifetime and memorized many verses.  I still love these scriptures and read them often. I’m not now among those misinformed Muslims who reject the Bible and set it up in opposition to the Quran; I know better.

Obviously, there are differences of opinion about how these scriptures were translated and what they teach, but these conflicts of interpretation come from readers, not from the Master who sent them.  The Quran itself says that Allah (swt) inspired Biblical writings:

He has sent down upon you, [O Muhammad], the Book in truth, confirming what was before it. And He revealed the Torah and the Gospel. [Quran, 3:3]

The central nugget of truth that I discovered, the hub of the Biblical wheel, was this: God is love, and those who live in love live in God. This same teaching shines more gold than gold in the pages of the Quran, and in the faces of the Ummah, the worldwide community of Islam.

How Did I Convert?

My conversion didn’t come about because I thought that Islam as a religious practice was superior to Christianity, or because I thought Muslims were somehow more pure than Christians. From where I’m standing, those who play the “my-religion-is-better-than-your-religion” card have missed the point of their own religion.

It began like this: A Muslim friend, after listening to me explain my relationship with God, insisted that I was already a Muslim. I got curious and began to study. As I learned about Muslim theology I realized that this was what I’d always believed. As much as I’d lived by the words of Jesus (peace be upon him) and loved his character, I’d never been able to pray to him without feeling uncomfortable. I had always prayed to God.

But I refused to convert. Why should I scandalize my family just because I didn’t believe Jesus (peace be upon him) was God? There are many Christian denominations that don’t believe this. I would simply become a liberal Christian.

Emerging From a Dark Mist

Then came the moment. I happened to be standing before a window in a beam of sunlight. All at once this sunlight enclosed me and filled my heart, and I knew I was Muslim.  The God whom I had always loved emerged from the dark mist and revealed himself as Allah the most glorified, the most high.

I don’t regret for a moment that I’m descended from a line of Protestants, preachers, deacons, prohibitionists, abolitionists, choristers, and zealots. These laid the foundation for my new life.  There were wolves among us, but the intention of most of our hearts was pure: we strove to be ever deepening our contact with our Maker.

Here’s what the Quran says about us:

They are not [all] the same; among the People of the Scripture is a community standing [in obedience], reciting the verses of Allah during periods of the night and prostrating [in prayer]. [Quran, 3:113]

Dad, we’re all Muslims. Muslims are simply those who live in obedience to Allah (swt). Prophet Mohamed (saw) was given a revelation comprised of a stern warning to the unrepentant as well as a set of religious practices that have the power to transform souls, to bring enlightenment, and to draw humanity together in peace.

Won’t You Join Me?

As you may have guessed, the longing of my heart is that you’ll also revert.  I’m fully aware of how momentous a change this would be for you, yet I hope and pray for it. Whatever you choose I will respect, honour, and care for you until your dying breath.

Warda Krimi is a Canadian journalist who reverted to Islam on the last day of Ramadan 2010.