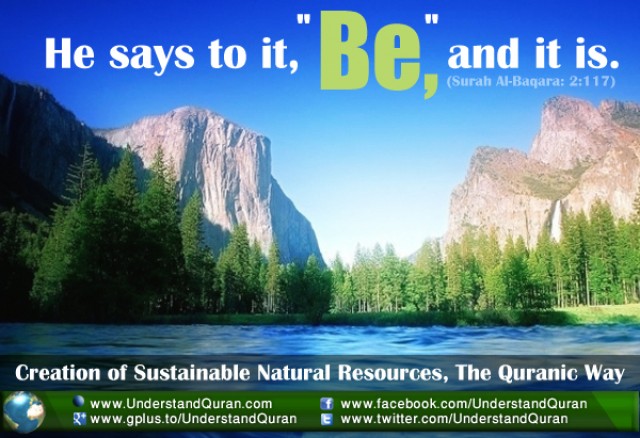 The Role of Water in Sustaining Life on Earth

All living plants and animals are not only created from water, their bodies are comprised of more than 60% water. Science refers to water as the universal solvent.  It is a good conductor of electricity as we have seen earlier with reference to lightning and thunder during storms. It also conducts electrical impulses through our bodies and this is important to day-to-day functions.  One can survive without food for a short while but not without water.

The benefits of water include the disposal of toxic body wastes, the control of the appetite, muscle tone maintenance, and the relief of fluid retention. It also reduces fat deposits by metabolizing them.

Generally speaking, water is classified as potable (sweet drinking) and (saline). Allah (swt) eloquently describes the differences in Surah Fatir: 12, The two bodies of water, of which one is sweet and pleasant to drink and the other is salty and bitter, are not alike. Yet from each kind of water you eat fresh meat and extract ornaments which you wear.

Barrier Between Fresh and Salt Water

Allah (swt) also created a perfect drainage system with mountains, valley and dales. In Surah Al Hijar (verse, 19), He describes, we have spread out the earth and set mountains upon it; and caused to grow every suitable thing in it; and We provided therein means of sustenance for you and many other creatures to whom you do not provide . . .

Among the other benefits, rainwater is carried to other areas for the benefit of the plants and the animals, eventually reaching the ocean.  As the water reaches the ocean, there is a barrier, which the Quran describes as burzaq, between the incoming river water and the receiving saline seawater.

Science also tells us that in estuaries the lighter freshwater flows over the heavier saline water, and seldom have they mixed.  During an incoming tide seawater flows up the river underneath the freshwater, and the freshwater flows (drains) towards the sea over the fresh water. The scientific explanation is that the variation in the salt composition creates a barrier between the two kinds of water.

Allah (swt) speaks about the divider between fresh and salt water as “a forbidding partition”.    As He describes, He is the one Who has made the two seas rolling, the one sweet and fresh and the other salt and bitter, and set a rampart between them a surmountable barrier [Surah Al-Furqan: 53], and in Surah An-Namal: 61 He says: . . . and placed a barrier between the two seas . . .

Such situations also exist in larger bodies of water, such as the Baltic and the North Sea, and the Atlantic Ocean and the Mediterranean Sea, due to variation in the densities of the water.

Allah (swt) describes the various sources and their storage for subsequent utilization in Surah Al -Mu’minun:18 where He reveals, And We send down water from the sky according to (due) measure and We cause it to soak in the soil and we certainly are able to drain it off.

One such resource is the revered holy water, “Zam Zam” in Mecca-al- Mukarramah, which has been providing sustenance for about 5000 years from the time of Prophet Ismael(saw). Zam Zam is not only a source of rahmat (blessing) but is also the one with medicinal properties.

The deep, dark trenches in the Pacific Ocean, near Tonga islands, are several kilometers deep.   There is no light at depths below 1000 meters. Human beings cannot dive more than 40 meters without the aid of special equipment.

The Holy Quran describes the situation in a delectable manner and compares it with the ignorance of human beings on earth: (the unbelievers’ state) is like the darkness in the deep sea.  It is covered by waves, above which are waves, above which are clouds. “Darkness, one above another.”  If a man stretches out his hand, he cannot see it. And he from whom Allah has not given light, there is no light for him. [Surah An-Nur: 40]

Investigations have found that in such deep waters the fauna and flora are adapted to the environment, for example certain body parts are reduced or lost, certain other parts are modified, like the shell of snails, their foot which is usually small, is enlarged to facilitate swimming.  Despite the almost complete absence of sunlight, many animals in these depths still have eyes and use them to spot their prey.  Most of the creatures are bioluminescent, equipped with special organs called photophores that emit light.

It is Allah (swt) who guides you (living beings) in darkness on the land and in the sea. [Surah An-Namal: 63]

Water being the main ingredient to sustain life, the conservation of water is vital for the survival of plants and animals, including humans.

All mankind is entitled to share this vital gift from Allah (swt) without monopoly, coercion or abuse.   As Allah (swt) says in Surah Qamar: 28, Tell them that the water must be shared between them, and each will come to the water at its own turn. Hence it becomes incumbent on us to protect and conserve the environment for the benefit of this generation and the generations to come.

Most of the scientific discoveries associated with the natural resources were made in the last century using highly sophisticated technologies developed over the years. It is not surprising that the modern scientific discoveries do corroborate with the clear and lucid descriptions of the topics by Allah (swt) in the Holy Quran.