Lesson from the Life of the Shaytan! 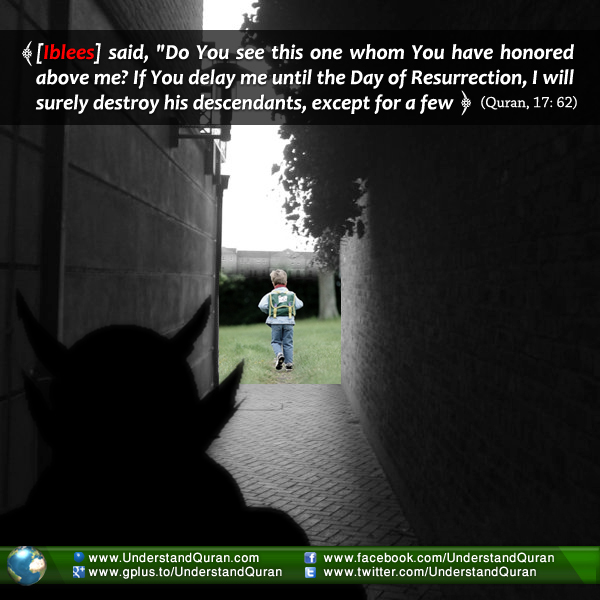 “Why does the shaytan always try and mess us up? Can’t he just do good deeds himself? All this energy he puts into our lives, he could have done so much good for himself!”

This was a question one of my friends put to me a few days ago. My friend was going through a low imaan phase and struggling with some sins that were hard to get out of. And that got me reflecting about how it all went wrong for the shaytan.

Every single character in the Quran has some benefit for us as Muslims. Even Satan or the shaytan has important life lessons that he can teach. We know that the shaytan used to be one of the top notch worshippers of Allah. In fact, his quality of worship was so good that Allah honoured him with a place among the angels. And he was there doing his worship until Adam (peace be upon him) was created.

When Adam was created all the angels were asked to bow down to him, and the shaytan was included in this command because he was trying to be as good as the angels. And this was where the shaytan lost it. He disobeyed. And he arrogantly disobeyed even when Allah admonished him to listen.

He claimed that he was better because he was created from fire— possibly the first instance of racism in world history as well. And he refused. Not only did he refuse, but he said he would spend the rest of his life trying to take humans off the straight path. But why?

A Righteous Worshipper Ruined by One Arrogant Sin

At times we forget about when we were lost and judge those who are. We forget what a gift it was from Allah that He took us out from the darkness and brought us to light. Allah brought us the light, and yet we mock at those who are stuck in darkness?

Arrogance was the sin that the shaytan had, and arrogance was his destruction. Arrogance is what we show, when we look down upon those who do not obey. We see their sin in the open, but Allah sees ours behind closed doors. Do we judge another only because they sin differently from us?

Guidance is a gift that Allah bestows very specifically. He bestows it on those He chooses out of pure grace. No matter what actions we may have done, a sin, especially out of arrogance, could make us lose out on the best gift we have here— guidance.

And once that gift is lost, no matter what we do, we cannot get it back unless Allah hands it back to us. Look at the shaytan. He has seen and heard the message of every Prophet sent to man. He knows Arabic better than the best of Arab linguists. He knows more hadith than the top hadith scholar, and knows Quran inside and out. He knows about Fiqh and all its branches, and also every single science under the sun. And yet, just because he has been denied the gift, he roams around spending his days lost and making others lose their way as well.

The shaytan arrogantly disobeyed and was deprived of his gift. Is it not a lesson to us to stop arrogantly disobeying our Lord? Is it not time we turned back to Him when time still is there? When he has guided us to repent and ask forgiveness? Do we want to be cursed and cast out as well? For sure, we do not.

Guidance is precious—A gift which is rare. As a recipient honor it well, and handle with care.