Small Acts Of Kindness: A Message From Surat Al-Ma’un 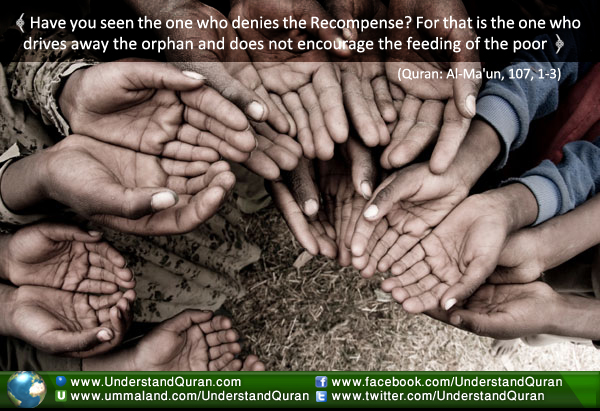 Surat Al-Mā`ūn is the 107th surah of the Quran. It emphasizes the “small kindnesses” that we may tend to neglect even though we perform the acts of prayer, and it also shows how the withholding of such simple assistance annuls the prayer and cancels out any outward piety one might display.

Islam is a Deen (way of life); it focuses on every aspect of life, be it devotion, clothing, food, commerce, or, in this case, small assistance. A paraphrase reading of the ayat and a brief commentary are set out below:

1. Have you seen the one who denies the Recompense?
2. For that is the one who drives away the orphan
3. And does not encourage the feeding of the poor.

The tone of the surah is set with a question; Allah (swt) has identified those who deny recompense (i.e. the coming judgement) and the Almighty further identifies such people as those who drive away the orphan and fail to encourage the feeding of the poor.

This is a firm warning from our creator and one quite unlike the traditional definition of a “disbeliever.” In this context, Allah subhanahu wa ta’ala refers to the people who don’t show kindness to orphans— who instead humiliate them and drive them away, hurting the orphan’s feelings and not showing care for the welfare of the needy— as those who have denied the faith.

The surah goes on to explain more of what is meant above:

4. So woe to those who pray
5. [But] who are heedless of their prayer

These verses contain a severe threat of destruction against those who offer their prayers but are unmindful about them. The verses go on to draw out clearly who such people are:

6. Those who make show [of their deeds]
7.  And withhold [simple] assistance.

These verses speak of those who make a show of piety yet refuse to give even the smallest help to others. Such people only perform the various actions and utter the verbal formulae of their prayers but they don’t put into practice the essence and purpose of prayer.

The crux of the message is that anyone can claim to be a Muslim by accepting the religion, its principles, offer his prayers and indulging in other acts of worship, but he may lack the essence and sincerity of the belief. Hence we’ve been presented with a Quranic verse warning us of the destruction of those who pray merely by carrying out the outwardly movements without spirit and sincerity.

Their prayers haven’t affected their hearts and behaviour; they’ve indeed gone astray in terms of sincerity and the small acts of kindness which Allah (swt) has so graciously bestowed on them as avenues through which to purify their hearts, seed  sincerity, and thereby attain the pleasure of the Almighty.

In the shade of the Quran (Volume 30) by Syed Qutb translated by M.A. Salahi and A.A.Shamis