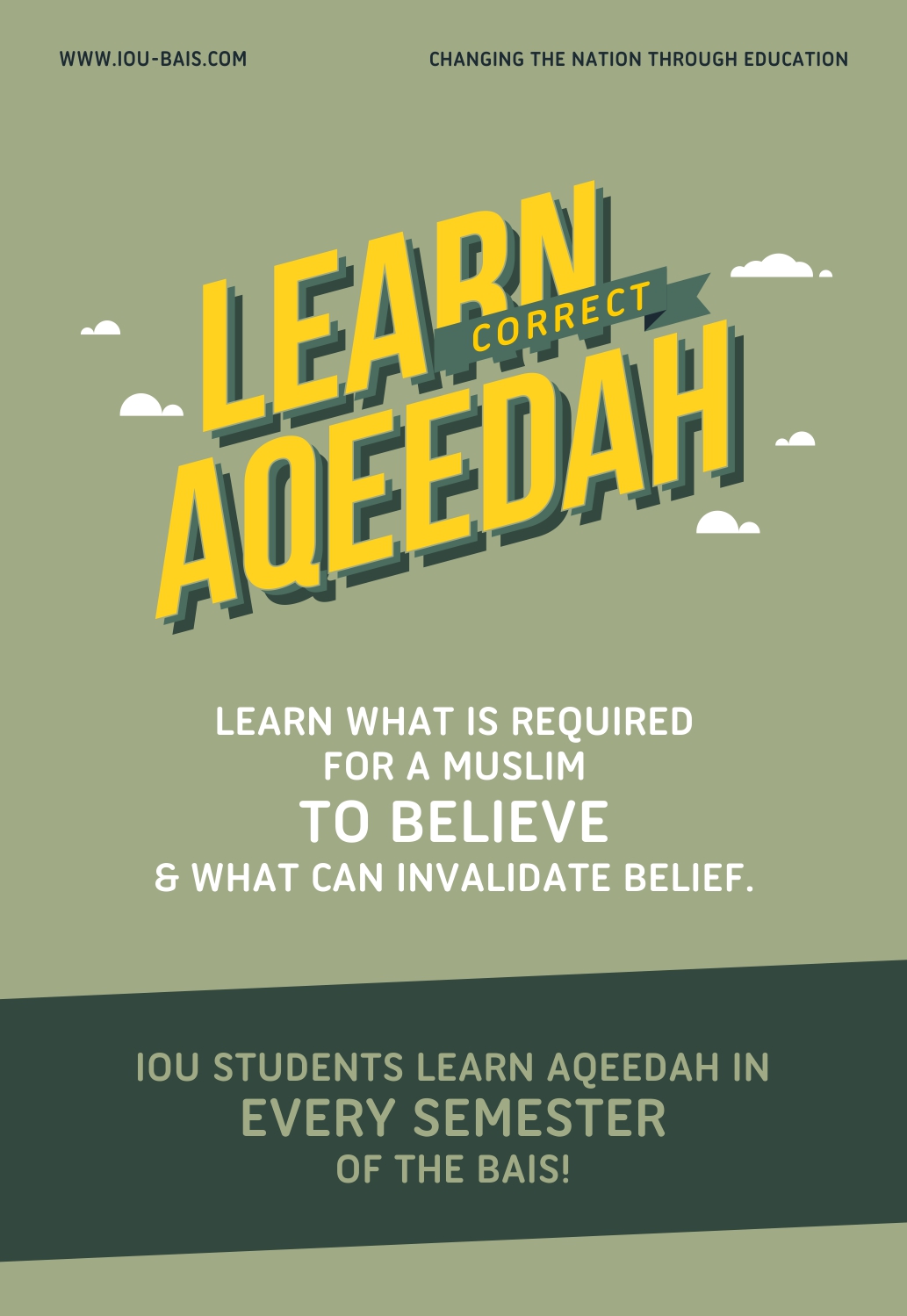 The greatest act a person can do, one that will get him or her into Paradise, is BELIEF IN ALLAH. Saheeh Muslim records from Abu Huraira: The Messenger of Allah was asked about the best of deeds. He replied: belief in Allah . . .  [Saheeh Muslim, Book 1, Hadeeth 148]

But is it enough to just believe in the divine being? Does every person who claims to believe there is a God have the right to claim to be a believer? What constitutes correct belief?

To answer such questions we must refer back to the One who is being believed in! Allah, subhanahu wa ta’ala, sent messengers with codes of life to guide mankind to true belief. It is not enough for mankind to follow his own whims and fancies in deciding what constitutes correct belief. If we believe in Allah solely for His pleasure, then it goes without saying that we should believe as He wants us to believe and in accordance with what is most pleasing to Him. We must re-frame our desires to be in line with what Allah expects from us.

Allah’s perfect justice does not allow Him to punish a person for faulty emaan if He did not reveal an accurate code for us to abide by. Do governments allow people to guess at what is legal and illegal in their countries? Do they allow people to decide how to live or what pattern of life to follow and then in the end punish some people for their desire to steal from others instead of working for their livelihood?

Instead, we see that countries, or any establishment for that matter, have fixed regulations, established laws, and sets of values that are made known to the public; thus, if people were to go against the preset standards, they would not feel resentful when held accountable.

Similarly, since Allah is the most fair of all judges, He will not hold man answerable for laws which He does not make known. Allah first tells us the way of life we ought to live, rites of worship to uphold, codes of ethics, morals, and behaviour to adhere to and then He brings us to account for them.

Allah tells us in Surat Al-Bayyinah:

Those who disbelieved among the people of the scripture and the polytheists were not to be parted [from misbelief] until there came to them clear evidence. (1) A messenger from Allah reciting purified scriptures (2) Within which are correct writings (3) Nor did those who were given the scripture become divided until after there had come to them clear evidence (4) And they were not commanded except to worship Allah, [being] sincere to Him in religion, inclining to truth, and to establish prayer and to give zakah. And that is the correct religion. (5) [Translation by Saheeh International]

Allah informs us of the very thing that will separate people from their wrong beliefs; it is the “clear evidence,” sent through a messenger reciting pure scripture. Allah also describes the same “clear evidence” as a reason that divided man. Unfortunately, people easily dispute upon what is right and what is wrong. So, Allah tells us what “the correct religion” is: worshiping Allah sincerely, inclining to truth, establishing prayer, and giving zakah.

But how exactly are we to worship Allah? How do we pray? How do we give zakah? With so many people convinced of following the one true path, how can we really know what we are doing is actually correct? This can only be achieved through a deep understanding of various aspects of our beautiful deen. And true awareness and appreciation can only come from learning.

Islamic Online University, offering the world’s FIRST tuition-free BA in Islamic studies, is here to help you achieve the goal of establishing a correct belief system based on revelation and the Sunnah. You will learn about the Quran, its explanation, Islamic creed and Islamic laws— the code of life, Islamic History and the life of Prophet Mohammad, peace and blessings of Allah be upon him. There are also subjects like Islamic Psychology, Islamic Business Management, and Research Methodology, all from an Islamic perspective.

The prophet, peace and blessings of Allah be upon him, is reported to have said, Whosoever Allah wishes good for, He gives him understanding of the Religion. [Bukhari and Muslim]

Remember, knowledge is what will bring us closer to Allah, our creator. Registration is open for the upcoming Fall 2013 semester. YOU can be among those who strive to learn the difference between that which will lead us to ultimate bliss and that which can lead to destruction of the soul— disbelief and MISbelief (mistaken belief).